PORVIR - Past, Present and Future 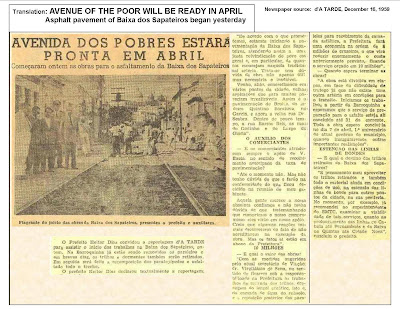 Loud noises of metal against metal and male voices shouting instructions to one another woke me up at night during the removal of streetcars rails on the ‘Baixa dos Sapateiros’ in 1960 Salvador, Bahia.

Streetcars[1] were being replaced by buses because the narrow streets of this colonial city could no longer be monopolized by just one form of public transportation. Also, influenced by the Brazilian modern architecture movement of Oscar Neimeyer, multi-stories box buildings were going up among colonial rococo, baroque and art nouveau structures. This was the ‘Baixa dos Sapateiros’[2] of my childhood.

Fifty-one years later, this February of 2011, my sister Gleydy and I made our way down the ‘Ladeira da Ordem Terceira de São Francisco’ - a very long name for a narrow slope that connects 'Pelourinho' to 'Baixa dos Sapateiros'. It was not nearly as steep and long as I had remembered.

At the bottom of the slope, I quickly recognized the edifice that still held the letters “Moveis Porvi(r)” (the last ‘r’ missing) that we simply called “o Porvir”. In Portuguese, porvir means future and in the early 60’s it represented just that - the future! 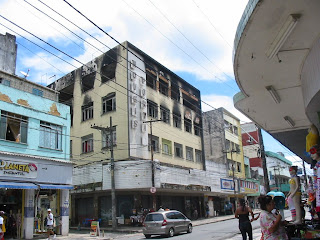 This building was square and sleek and housed a stylish modern-design furniture store on its ground floor and the furniture factory at the back. The floors above the store consisted of two-bedroom apartments inhabited by middle class families. We became the Jetsons of 'Baixa dos Sapateiros' when my parents purchased from Moveis Porvir a dining set, complete with a buffet sideboard, “functional” in style with an “ivory” finish, currently known as mid-cen 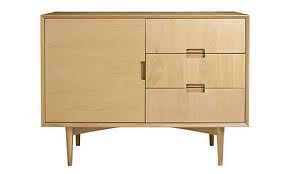 As soon as we started photographing ‘o Porvir’ a well meaning employee of a clothing store nearby suggested that we put our cameras away and that we keep a low profile because the area was not safe for tourists. Wow, this was no longer the neighborhood that a six year old could walk to the bakery to buy fresh bread in the mornings. Nor was it the same neighborhood whose merchants made sure your business got home before you did. Like the time my father returned from a trip to Buenos Aires with Argentine pesos that I mistook for play money and proceeded to go around the neighborhood buying candy, Crush® and Grapette® soft drinks (my favorites).

Sheltered in the clothing store and looking at the burned out third floor of 'o Porvir', I wondered how was it that the fire did not destroy the whole building. Then it occurred to me that except for the windows, doors and parquet floors, this structure was a concrete bunker minus the dugout. The interior of the building had balconies surrounding a open air atrium from the first to the third floor with a courtyard on the first floor. Although the balconies were secured by a solid concrete fence, this did little to soothe my father's fears of us going over the side.

We noticed that the first two floors of 'o Povir' were inhabited and therefore we might be able to get in. This incited an even greater warning from our new protectors at the clothing store. These few words caught my attention "... if you are able to walk out of there alive, you surely won't walk out with your purse, clothing or any valuables."
Well, then, the decision was made to just walk over to the 'Ladeira de Santana', go up the slope and visit the Adventist Church and the Sociedade Israelita da Bahia-Synagogue next door, and being Saturday afternoon, there's bound to be someone around. Agai 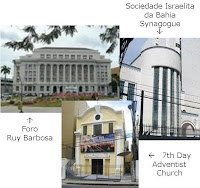 n, our friends protested. They insisted that it was much too dangerous for us to walk that short stretch and we should take a bus or taxi instead.

Email ThisBlogThis!Share to TwitterShare to FacebookShare to Pinterest
Labels: Experiences

Very interesting story Vinha. I didn't know you had a blog. I'll be sure to check back from time to time to read your posts.

Memories of a simpler time seen by the eyes of a child and now as an adult.

I just found out you have a blog.. definitely I'll check back periodically for more postings.